Photo of the Coo-ees at Hartley

Photo of the Coo-ees at Hartley

This great quality photograph of the Coo-ees lined up outside the Royal Hotel at Hartley on Thursday morning, 4th November 1915, shows them standing at attention, wearing their new white hats and blue dungarees that they had been issued with at Lithgow, ready to set off on the Great Western Road to Mount Victoria. 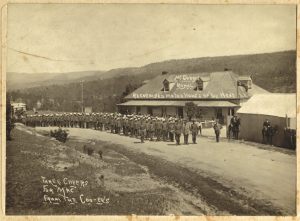 Captain Eade is standing at the front of the column on the left, with Corporal Bill Hitchen standing beside him in the centre front row.

The “Mac” referred to in the caption was Robert McGarry (1864-1942), who was the proprietor of  Royal Hotel at Hartley, where he had a wine licence and provided accommodation. The Royal Hotel was a popular “half-way house” for tourists and travellers to stop for refreshments and a rest in motor cars and on motor cycles at the time.[1]  Mr McGarry had officially welcomed the Coo-ees to Hartley on behalf of the village residents the afternoon before, and other members of his family had also assisted in the hospitality that had been provided to the men, which had included a ‘splendid dinner and breakfast’.[2]

This historic building is still standing, and the marchers on the 2015 Coo-ee March Re-enactment took the opportunity to pose for a photograph in the same location 100 years later, on 4th November 2015. 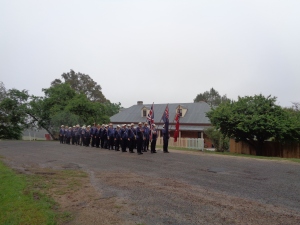 Mrs K. Edmonds has sent me this studio portrait photograph of her grandfather William Hilton Saunders with another soldier, who she thinks is his friend and fellow Coo-ee from Wongarbon, William Collyer.

Driver William Hilton Saunders is seated on the left in the photograph.

William Hilton Saunders mentioned that both he and William Collyer had grown moustaches in the first letter he sent home to his parents at Wongarbon, after arriving in Egypt:

“You would not know Will and I now, we both have moustaches, and I weigh 70 kilogrammes, which is equivalent to about 11 stone, so you see I have put on a considerable amount of flesh already since leaving Australia”.[1]

The backdrop behind the two soldiers in the photograph appears to depict the ruins of St Martin’s Cathedral at Ypres in Belgium.  William Hilton Saunders would have been familiar with this scene.  He noted in his diary on Friday, 29th September, 1916:

‘’I went out with G S W [General Service Wagon] & team to Ypres (about 6 miles) for bricks. Cruel yet interesting sight to witness. A fair town in peace time, but was utterly devoid of life except for soldiers who have to live in old cellars etc. Everything is one mass of ruins & where buildings are not blown right down enormous gaping shell holes mark the billet of some of Fritz’s death messengers.  We got a couple of loads of bricks from the Ypres church & arrived back early this morning, out all night”.[2]

On reading William Hilton Saunder’s 1916 to 1918 diaries, I only found one entry in which he refers to having had his photo taken during this period.

On Sunday, 22nd October 1916, he wrote: “Will Collyer & I went to Poperinghe on leave. Rode our mules & had a good look around. Both had our photos taken. Poperinghe about the size of Dubbo …”.[3]

Procession that welcomed the Coo-ees to Bathurst 28 October 1915

Procession that welcomed the Coo-ees to Bathurst 28th October 1915

This photograph of the procession that welcomed the Coo-ees to Bathurst on Thursday 28th October , was taken from the corner of Russell Street and William Street, looking towards to Bathurst Court House.

The photograph partly shows two mounted police in the foreground, on William Street, then a brass band, following by men carrying rifles, at the head of a procession marching along Russell Street, next to King’s Parade. Trees obscure the rest of the procession. Spectators line the street. Bunting hangs across the road. The majestic Bathurst Court House can be seen in the background.

This photograph is from the family album of Lieutenant Frank Middenway’s daughters, now held by his granddaughters, Dorothy Clampett and Margaret Murden. Lieutenant Middenway, from Lithgow Army Camp, assisted with recruitment on the Coo-ee March from Lithgow to Sydney.

This photograph was recently published in an article titled ‘Coo-ee’, written by Ann O’Connell, in ‘Ashfield Answers the Call’, Ashfield History No. 20, Journal of the Ashfield and District Historical Society Inc.[1]

A description of the procession that lead the Coo-ees through the streets of Bathurst to the Soldiers’ Memorial in King’s Parade, which was built in 1909 to honour the Bathurst men who served in the 1899-1902 South African War, is given in the following transcription of an article titled ‘Recruits’ published in the Bathurst Times on 29 October 1915: [2]

BIG CROWDS IN THE STREETS AND PARK.

Down the hill along Lambert-street at about 4 o’clock yesterday afternoon came a procession unique in the history of Bathurst, and one which portended the serious manner in which the serious crisis in which the Empire is at present involved is taken by the males of the community. For the Gilgandra recruits— that gallant band of volunteers inaugurated by Captain T B. [sic] Hitchen — were entering the good old City of the Plains, and the Bathurst people had determined that the reception accorded them should be one worthy of the town and district.

Enough has been said of the commendable nature of the scheme of Captain Hitchen, and the arrival yesterday of the ever-increasing band of men that goes to prove the value of the captain’s recruiting effort was made the occasion of a gala day in Bathurst, the attendance in the streets and elsewhere, and the enthusiasm displayed being typical of the high esteem in which the marching recruits are held.

At the corner of Stewart and Lambert streets, where the procession entered the town proper, a sign was displayed on the balcony of the Hotel Dudley, which read: ‘Well done, Coo-ees! We welcome you, and wish you God-speed,’ and this formed a fitting word of welcome to the gallant little band. All along the streets to the King’s Parade, where the Union Jack and Australian ensign flew proudly aloft on the newly erected flagstaff, crowds of enthusiastic citizens lined the way, and united in the effort to make the welcome to the recruits a warm one.

The procession was headed by a section of mounted police, behind which marched the City and Salvation Army Bands, discoursing excellent martial music. The local cadets followed, marching in good time ahead of scholars of the various schools and convents of the district, wearing the dainty costumes aired on the Belgian Day and Australia Day celebrations. His Worship the Mayor came next in a conveyance, followed by Mr A. G. Chiplin, in solitary glory in a hansom cab. The Military Band, under Mr. Lewins preceded the Gilgandra and other recruits, who were accorded a royal reception all along the route. “First Stop— Berlin,” read the inscription on one of the transport waggons, and each of the conveyances of the various units bore some similar indication of the determined spirit of the volunteers. The Civilian Rifle Club members marched behind the recruits, and were followed by a number of motor cars and other vehicles. The appearance of the banner “Bathurst Boomerangs” was the signal for an out-burst of emphasised applause, and the local quota to the strength of the contingent was accorded a brilliant reception.

On the way to the King’s Parade the frequent call of “Coo-ee!” echoed in the air, punctuated by the musical clang of the bells of All Saints’ Cathedral and the cheers of the multitude. Bunting was prominent everywhere, and as the procession turned into Russell-street from George-street it passed beneath a string of flags and words of welcome.

The scene when the recruits and others assembled at the Soldiers’ Memorial was a memorable one, and the remarks of the Mayor when welcoming the recruits were lost on the ears of the majority of the big assemblage. Nevertheless there was no mistaking the enthusiastic spirit of the multitude, and Bathurst may well feel proud of the greeting it accorded the band of gallant Empire defenders on their arrival.

Mr Beavis, who was supported on the Memorial by Captain Hitchen, Major Wynne, Captain Eade, Sergeant Lea, Mr. Fern, M.L.A., Major Machattie, and others formally welcomed the recruits to Bathurst. He mentioned that the town had already spent £15,000 in contributing to the various war funds, and that 400 of its men had joined the colors, while doubtless from 500 to 1000 more would do so in the future.

Captain Hitchen returned thanks for the reception accorded the recruits, which had been most flattering to himself and all concerned.

Having been entertained at after-noon tea by the ladies’ committee, the recruits marched to the Show Ground, where an excellent evening meal was served, in order that they might attend the evening’s proceedings in Machattie Park refreshed and keen on the recruiting aspect of the fixture.’

Posted in Other articles

Updated photo of the Coo-ees at Orange

Macquarie Regional Library has kindly supplied me with a higher resolution view copy of the photograph of the Coo-ees at Orange for this website.  I have replaced the photo on the https://cooeemarch1915.com/2015/07/26/photo-of-the-coo-ees-at-orange/ page with this better image.

For those who follow my blog posts by email you might like to revisit this page and click twice on the photo to increase its size. They quality of the photograph is quite remarkable.

See if you can find the two little dogs in the photograph.  Harder to spot is a little black kitten!

Included in this photograph are the men who enlisted in the Coo-ee Recruitment March as they marched from Gilgandra to Dubbo, Wongarbon, Geurie, Wellington, Stuart Town, Euchareena, Molong, through to Orange, where the photograph was taken. (Some may be missing, including the 5 in Orange Hospital sick at the time).

If you have a photograph of a Coo-ee in your family photo collection that joined  the Coo-ee March between Gilgandra to Orange, please take a moment and see if you can find him in this group photograph.

Please send an email to me at cooeemarch1915@gmail.com if anyone can identify any of the people in this photograph.

Photo of the Coo-ees at Orange

PHOTO OF THE COO-EES AT ORANGE

This is a photograph of the Coo-ees who were in the Gilgandra to Sydney Cooee-Recruitment March, taken while they were in Orange in October 1915.  Inscribed on the back of the photograph is “The Coo-ees at Orange”.

Except for Captain Bill Hitchen from Gilgandra (sitting in the middle of the second row from the bottom), the people in it are not identified.

Included in this photograph are the men who enlisted as they marched from Gilgandra to Dubbo, Wongarbon, Geurie, Wellington, Stuart Town, Euchareena, Molong, to Orange, where the photograph was taken. (Some may be missing, including the 5 in Orange Hospital sick at the time).

There are approximately 104 men, and 23 women seated on a grandstand, which was situated at Wade Park in Orange. Most of the women are seated at the back.

Names of the dignitaries and local Orange people included in the photograph were reported in a 1915 newspaper article, and these people too need to be identified in this photograph. Per The Leader (17 November 1915, p. 8): ‘Seated in the group are the Mayor and Mayoress (Ald. and Mrs E. T. Neilly) Mr H. J. Leary, secretary of the Orange Recruiting Association. Mr. A. J. McCoy, headmaster of the Orange Public School, Mr. V. H. Millard, and the ladies who gave their services towards looking after “Hitchen’s Own” what time they were in Orange.’