On 20th January 2020 Stephen and I drove to Jerusalem War Cemetery in Jerusalem, Israel.

Due to light rail work being undertaken along the front of the cemetery, access via the front gate was not possible, and we had to enter the cemetery by a side gate next to the hospital.

Jerusalem War Cemetery is located next to the Hadassah Hospital, and is about 4.5 kilometres north of the old walled city of Jerusalem.

Burials in Jerusalem War Cemetery began after the occupation of Jerusalem by Allied forces in December 1917.

Henry William Nicholls, a contractor who had been working at Coonamble when he enlisted in the A.I.F. and joined the Coo-ees at Molong, is the only Coo-ee buried in this Cemetery.

Trooper Nicholls was killed in action on 7th May 1918 when enemy aeroplanes bombed the 7th Light Horse Regiment camp at Jericho, Palestine. 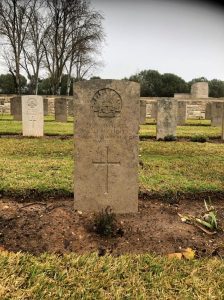 A photograph of the headstone on Trooper Nicholls’ grave has been placed on his individual blog entry, and on his entry on the Roll of Honour for the fallen Coo-ees on this blog.

Posted in Cemeteries and Memorials, Remembering the Coo-ees