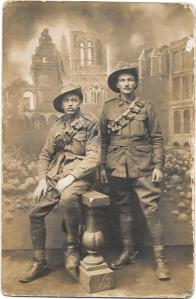 Mrs K. Edmonds has sent me this studio portrait photograph of her grandfather William Hilton Saunders with another soldier, who she thinks is his friend and fellow Coo-ee from Wongarbon, William Collyer.

Driver William Hilton Saunders is seated on the left in the photograph.

William Hilton Saunders mentioned that both he and William Collyer had grown moustaches in the first letter he sent home to his parents at Wongarbon, after arriving in Egypt:

“You would not know Will and I now, we both have moustaches, and I weigh 70 kilogrammes, which is equivalent to about 11 stone, so you see I have put on a considerable amount of flesh already since leaving Australia”.[1]

The backdrop behind the two soldiers in the photograph appears to depict the ruins of St Martin’s Cathedral at Ypres in Belgium.  William Hilton Saunders would have been familiar with this scene.  He noted in his diary on Friday, 29th September, 1916:

‘’I went out with G S W [General Service Wagon] & team to Ypres (about 6 miles) for bricks. Cruel yet interesting sight to witness. A fair town in peace time, but was utterly devoid of life except for soldiers who have to live in old cellars etc. Everything is one mass of ruins & where buildings are not blown right down enormous gaping shell holes mark the billet of some of Fritz’s death messengers.  We got a couple of loads of bricks from the Ypres church & arrived back early this morning, out all night”.[2]

On reading William Hilton Saunder’s 1916 to 1918 diaries, I only found one entry in which he refers to having had his photo taken during this period.

On Sunday, 22nd October 1916, he wrote: “Will Collyer & I went to Poperinghe on leave. Rode our mules & had a good look around. Both had our photos taken. Poperinghe about the size of Dubbo …”.[3]

One response to “Photograph of William Hilton Saunders and William Collyer”