Per his military service record (Depot), Edgar Dawson was born at Bathurst, N.S.W.[1]  He gave his age as 29 years and 7 months, his marital status as married, and his occupation as labourer.  His description on his Certificate of Medical Examination was height 5 feet 8 ¼ inches tall, weight 116 lbs., with a dark complexion, bluish eyes, and brown hair. His religious denomination was Church of England.  He claimed that he had no previous military service.

His next of kin was recorded on his Attestation Paper of Persons Enlisted for Service Abroad as his wife, Mrs E. [Coral Edith] Dawson, Post Office, Bathurst N.S.W.

He completed his medical examination, and was attested by Lieutenant Frank Middenway, at Ashfield on 11th November 1915.

An initial Application to Enlist in the Australian Imperial Force form dated 2nd November 1915 in his service record shows that he undertook a preliminary medical examination at Bathurst on 2nd November 1915, and “Route March Mt. Victoria” is written at the top of this form, so it appears he may have first presented to join the Coo-ee March at Mt. Victoria.

Private Dawson returned to the Liverpool Camp with a Doctor’s Certificate dated 19th February 1916 stating he had been suffering from Entero-colitis.

His service record shows that on 22nd February 1916 his wife sent a letter requesting his discharge on the grounds that she believed that he was ‘not physically robust to go to the front’.

On 25th February 1916 Private Dawson went before a Medical Board that found him fit for military service.

On 3rd March 1916 Private Dawson’s wife sent another letter requesting his discharge due to their three young children aged 7, 5, and 3 years,  being sick with measles.

She sent another letter on 7th March 1916 stating that she also was sick and was not able to look after their children on her own. These letters did not appear to have any effect, and on 13th March 1916 Private Dawson went absent without leave again.

On 13th April 1916 Private Dawson was apprehended by the Military Police and taken to Victoria Barracks.

On 20th April 1916 he was discharged from the Australian Imperial Force ‘at wife’s request’.

Who were the 22 Ashfield recruits?

The Coo-ees held a recruiting meeting, and stayed the night at the Drill Hall at Ashfield on Thursday, 11th November, 1915 – their last night of the Coo-ee March on their long route from Gilgandra to Sydney.

This is now the site of the Ashfield Boys High School gymnasium, and a new car park named Coo-ee Car Park in memory of the 1915 Coo-ee March built recently by the Wests Ashfield Leagues Club.  A plaque about the Coo-ees at Ashfield was unveiled at the Coo-ee Car Park on 21st April 2015. 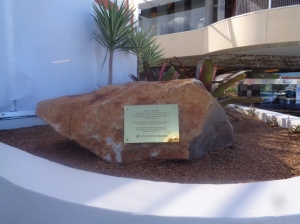 A plaque on an obelisk is situated in the grounds of the Ashfield Boys High School. It has been there for some time. On it are the words: “Celebrating Gilgandra Coo-ee Marchers 11 November 1915 22 Ashfield men joined with the Coo-ee marches here on this day”. 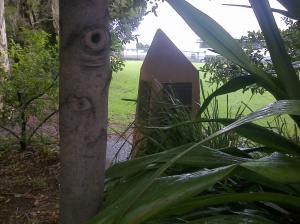 Although the “official” count for the total number of Coo-ees recruited on the 1915 Gilgandra to Sydney Coo-ee March per newspaper articles of the time was 263, with Ashfield having a total of 22 recruits, the Sydney Morning Herald reported on 13th November 1915 (p. 19) that ‘the contingent left the western suburb’ of Ashfield ‘about 263 strong, but there are others now to be sworn in – men who joined the little army yesterday.’ The Farmer and Settler reported about Coo-ees numbers on 21st December 1915 (p. 3) that ‘there were no fewer than 277 men on their last pay sheet in camp’.

We have found the following names of 23 men who were attested at Ashfield at the time the Coo-ees were recruiting at Ashfield. We note that one (Bert Kilduff) had paperwork dating only from 12th November 1915 in his service record, so perhaps the ”official” count of 22 recruits was taken the night before at Ashfield, and he was not included.  Although two others also completed their medical examination and signed their attestation paper at Ashfield on the 12th November 1915 (Thomas Edward Bow and Charles Seal), they had both signed the bottom of the first page in their ‘Attestation paper of persons enlisted for service abroad’ on the 11th November 1915.

Richard John CROCKER (no service no.)

Edgar DAWSON (no service no.)

Albert HULBERT (no service no.)

Not all of these men were local to the Ashfield area. Some were men who had joined the Coo-ees earlier in the march, or caught up with them at Ashfield, who signed their attestation paper to enlist in the Australian Imperial Force at Ashfield.

William Ellery was reported to be a long term resident of the Dunedoo area before he left to join the Coo-ees.  Edgar Dawson started filling out his paperwork in his service record in Bathurst.  Jack Wiggins was known as a Springwood recruit. Sam Luke joined the Coo-ees at St Marys. Selby Megarrity undertook his medical at Penrith, the day before the Coo-ees arrived at Ashfield.

Fourteen of the Ashfield recruits embarked overseas with the majority of the Coo-ees on the transport  HMAT A15 Star of England on the 8th March 1916.  Five more embarked on other ships soon after.

An individual blog entry will be added to this website for each of the above named Coo-ees.