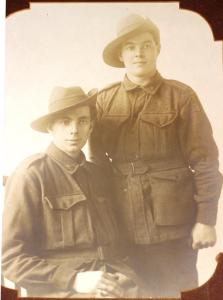 Per his military service record (regimental no. 4469), James Birrell Dawson was born at Joadga Creek, N.S.W. He gave his age as 19 years and 9 months, his marital status as single, and his occupation as miner. His description on his medical was height 5 feet 3 ¾ inches tall, weight 122 lbs., with a fresh complexion, brown eyes, and brown hair. His religious denomination was Presbyterian. He claimed that he had 12 months previous military experience with the Senior Cadets in Lithgow, and that he had been rejected by the 41st Infantry [Regiment of the Militia] for being ‘not tall enough’.

The Lithgow Mercury reported that ‘He was formerly employed as a wheeler at the Oakey Park colliery’, and that he ‘enlisted with the “Coo-ees” and marched to Sydney with this body of men’.[1]

A farewell party was held for Private Dawson at Oakey Park in early January 1916 before his departure overseas, where he was presented with a fountain pen, military hairbrush, and comb, and ‘dancing and singing were indulged in until the small hours’.[2]

On his embarkation roll his address at time of enrolment was Oakey Park, Lithgow, N.S.W, and his next of kin is listed as his father, G. [George] Dawson, at the same address.

On 16th February 1916 Private Dawson was one of the first group of Coo-ees to embark overseas on active service, and departed Sydney on the HMAT Ballarat A70 as 14th reinforcement for the 13th Battalion.

On 1st April 1916 Private Dawson, (along with the other Coo-ees he had travelled to Egypt with), was transferred to the 54th Battalion at Ferry Post.

On the night of the 19/20th July 1916 Private Dawson was with the 54th Battalion when it participated in the Battle of Fromelles. During the battle he was wounded in action, suffering a gun shot wound to his right forearm.

On 3rd August 1916 he was placed aboard the Hospital Ship Newhaven for evacuation to England. Later that day he was admitted to the Huddersfield War Hospital.

On 8th September he was taken on strength by No. 2 Command Depot, Weymouth, England.

A letter that Private Dawson wrote home to his mother during his time convalescencing at Weymouth in England was published in the Lithgow Mercury:

‘Private James Dawson, Lithgow, writing to his mother from Monte Video camp, Weymouth, Dorset, under date September 11 [1916], said he was quite well. His arm (which was amputated) was about healed up and did not trouble him at all then. He had been in England since August 3. He was in Huddersfield Hospital until September 8, when he was removed to the first-named address. While he was a Huddersfield he had an enjoyable time. He was only there three days before he was out to three garden parties in succession, and had a “great time.” They were the first Australians to go there and the people could not do enough for them. He always had plenty of places to go to for tea. All the picture shows and theatres were free to them, and even the young ladies used to take the chaps home to tea with them, and it was a great place. But it was very quiet at Weymouth after having been at Huddersfield’. [3]

On 20th September 1916 he was transferred to the 2nd Australian Auxiliary Hospital at Southall, England, which specialised in fitting artificial limbs.

On 21st December 1916 Private Dawson was discharged from hospital, and granted furlough, to report back to the 2nd Australian Auxiliary Hospital on 5th January 1917.

During his stay at the 2nd Australian Auxiliary Hospital he wrote the following letter home to his mother, which was published in the Lithgow Mercury:

‘Pte. James Dawson, writing from the 2nd Australian Auxiliary Hospital, Southall, England, to his mother, Mrs G. Dawson, Oakey Park, under date February 9 [1917], says:–“I am getting on splendidly. I have had another operation since I last wrote, making three in all. But I think it will be the last, as I have been measured for the artificial arm and will be getting it in two or three weeks. I am having a very good time here – always going out to tea or theatre parties, etc. In fact, the people can’t do enough for us. We are getting well looked after in hospital, but I am getting sick of hospital life. It has been nothing else but snow these last few weeks. No sun ever shines; it is only wind and snow. I don’t think they have any summer at all. I received the other day four letters addressed to Egypt. They chased me all round the country. They were very dirty and torn when I got them; otherwise they were all right. I have only had one parcel but no papers. I don’t know where those sent got to.”[4]

On 5th April 1917 Private Dawson was discharged from the 2nd Australian Auxiliary Hospital to commence his return to Australia.

Private Dawson departed Devonport, England on 4th May 1917, aboard the Transport Themistocles. Also travelling with him on the same ship was his friend and fellow Coo-ee Walter Goodlet, who had also lost an arm.

They disembarked at Sydney on 5th July 1917.

Private Dawson was discharged medically unfit, with a disability of an amputated right arm, on 12th December 1917.

Coo-ees in the Battle of Fromelles, and the first Coo-ee to die on active service

Coo-ees in the Battle of Fromelles, and the first Coo-ee to die on active service

On the 16th February 1916 15 Coo-ees departed Sydney as 14th Reinforcement for the 13th Battalion aboard the HMAT A70 Ballarat. These men left Sydney before the bulk of the Coo-ees embarked from Sydney on the HMAT Star of England on the 8th March 1916.

Upon the arrival of the HMAT A70 Ballarat in Egypt on the 22nd March 1916, these 15 Coo-ees were transferred to the 54th Battalion. Two of them (Percy George Brown and John William Thompson) fell ill and was hospitalised, but the other 13 departed for France on 19th June 1916 aboard the HT Caledonian, arriving at Marseilles on 29th June 1916.

After their arrival in France another Coo-ee fell ill (John Martin) and was hospitalised in England. Two others (John Tarlington and Colin David Wren) transferred to the 4th Pioneer Battalion, and another (Eugene Norris) to the 57th Battalion, with nine Coo-ees remaining with the 54th Battalion.

According to the Australian War Memorial (https://www.awm.gov.au/wartime/36/article.asp), the Battle of Fromelles was a disaster, and  the ‘worst 24 hours in Australian history’, with 5,533 Australian casualties in one night, which was  ‘equivalent to the total Australian casualties in the Boer War, Korean War and Vietnam War put together’.   The attack commenced at 6 pm on 19th July 1916, and was over by 8 am on the 20th July.

Of the nine Coo-ees in the 54th Battalion at Fromelles, 42 year old Charles William Gordon Conroy (who joined the Coo-ees at Orange), and 19 year old Joseph Patrick Wallis (Wailes) (who joined the Coo-es at Dubbo) were both killed in action during the Battle of Fromelles, on 19th/20th July 1916.  They were both listed with no known grave, and their names were commemorated at the V.C. Corner Australian Cemetery and Memorial at Fromelles, France.   The body of Joseph Wallis was identified in 2010, and he was reinterred in the Fromelles (Pheasant Wood) Military Cemetery in France.

Henry Blakeman (Lithgow), James Dawson (Lithgow), John Fox (Bathurst) and William Walker (Molong) were wounded at the Battle of Fromelles. Joseph Armstrong (who joined the Coo-ees at Dubbo) and Donald Stewart, one of the youngest of the Coo-ees, (who joined at Wellington), were captured, and spent the rest of the First World War as prisoners of war. Only one of the nine Coo-ees in the 54th Battalion (Edwin Fuller from Orange) survived the Battle of Fromelles unscathed.

However, Thomas Thorne, (who joined the Coo-ees at Lawson), was the first of the Coo-ees to die while on active service overseas. He embarked from Sydney on the HMAT Star of England on 8th March 1916, and had arrived in Egypt on the 11th April 1916. Acting Sergeant Thomas Thorne became ill while on a transport ship taking him from Egypt to England, and he was admitted to Devonport Military Hospital on 16th June 1916. He died of illness two days later of Pneumonia on 18th June 1916 (aged 23), having not seen any active service.

Note: I wish to acknowledge the research assistance of Stephen Thompson in writing this article.