Per his military service record (regimental no. 4886), Arthur Charles Reid [or Arthur Charles Reed per his signature or Arthur Charles Read per his 1890 N.S.W. BDM Index birth registration] was born at Forbes, N.S.W. He gave his age as 25 years, his marital status as single, and his occupation as Shearing Machine Expert. His description on his medical was height 5 feet 10 inches tall, weight 13 stone 1 lbs., with a medium complexion, blue eyes, and brown hair. His religious denomination was Church of England. He claimed to have no previous military experience. He was attested on the 5th November at Katoomba, and completed his medical on the 6th November 1915 at Lawson, on the same days that the Coo-ees were in these towns.

He went to Liverpool Camp as reinforcement for the 13th Battalion.

On his embarkation roll his address at time of enrolment was Waitohe Condobolin, N.S.W., and his next of kin is listed as his father, F. H. Reid [Reed or Read], Coerrie [written elsewhere as Colarie or Calarie] Forbes, N.S.W.

Along with many of the Coo-ees, Private Reid departed Sydney on the HMAT Star of England on the 8th March 1916. He arrived in Egypt on the 11th April 1916.

On the 6th June 1916 Gunner Reid left Alexandria aboard the Oriana bound for France, arriving at Marseille on the 13th June 1916. On the 25th June 1916 he was taken on strength of the 4th Division Medium Trench Mortar Battery.

On the 8th September 1916 after seeing action on the Somme Gunner Reid had just arrived at the front in the vicinity of Vierssraat, Belgium, when he received a gunshot wound to his head. Private Reid was evacuated to the 11th Canadian Field Ambulance where he died of his wounds the next day. 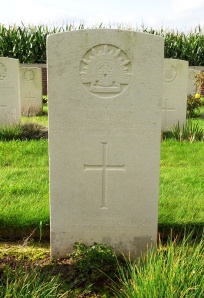