The annual Gilgandra Coo-ee Festival was held on the long weekend in October to commemorate the 1915 Coo-ee March, which started 99 years ago on Sunday, 10th October, 1915. The events held included a street parade on Saturday 4th October 2014 lead by re-enactment Coo-ee marchers, and included the South Pacific Concert Band from Sydney, and a variety of vehicles and floats. Crowds lined both sides of the main street. The street parade started off at 11.30 am in Bridge Street near the Royal Hotel where the original march started in 1915.

The street parade ended with a memorial wreath-laying and flag raising ceremony at the memorial gates to Cooee March Memorial Park. 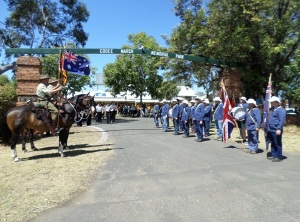 On Sunday morning 5th October 2014 a Coo-ee Commemoration church service was held at St Ambrose Church in Gilgandra. Coo-ee re-enactment marchers, and the South Pacific Concert Band with local musicians, attended the service. The names of the 35 1915 Coo-ees from Gilgandra were read out as part of the service.   Having recently visited the graves of those Coo-ees in our recent holiday to England, France and Belgium who did not return from the First World War, including Coo-ees Charles Finn and Harold Baxter from Gilgandra, made this experience particularly moving for me. 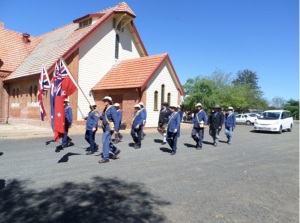 The Coo-ee re-enactment marchers, and the band, then marched to the marker and plaque in Bridge Street, which was placed in 1965 in a ceremony commemorating the 50th anniversary after the march, and a short service was held there. A bugler played the last post. 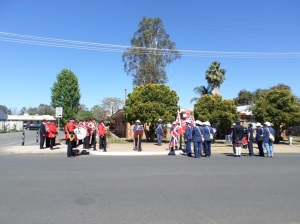 The Coo-ee renenactor marchers and the band then marched round the corner into Miller Street and fell out in front of Hitchen House. The re-enactment Coo-ee marchers, wearing replicas of the distinctive white hats and blue jackets issued as the uniform of the Coo-ees on the original 1915 march, were lead by Brian Bywater, who is President of Coo-ee March 2015 Inc., which is organising a centenary 2015 Coo-ee March Re-enactment. Brian also owns the Hitchen House Military Museum, which was formerly owned by Bill Hitchen.

It was on this verandah 99 years ago where Bill Hitchen, a local plumber and Captain of the local rifle club, and his brother Dick, the local butcher, one evening over a pipe and a discussion about the casualty rates and falling recruiting numbers, and the call for more men to fight at the Dardanelles on the Gallipoli Peninsular, conceived the idea of the route march from Gilgandra to Sydney, stopping in the towns and villages along to way, as a means to raise recruits for the war effort during the First World War.

Posted in Remembering the Coo-ees, Towns