Per his military service record (regimental no. 5489), Lewis Leoville was born at Marseilles, France. He is listed with the alternate spelling of his first name as Louis Leoville on some documents in his service record (and in earlier newspaper advertisements for his hairdressing saloon business). He is listed as being a naturalised British Subject. He gave his age as 41 years, his marital status as married, and his occupation as barber. His description on his medical was height 5 feet 6 inches tall, weight 156 lbs., with a dark complexion, grey eyes, and dark brown hair. His religious denomination was Roman Catholic. He claimed that he had 3 months previous military service in the French Army. He completed his medical on the 3rdNovember 1915 at Lithgow, and was attested at Lithgow on the same day.

On his embarkation roll his address at time of enrolment was Binalong, N.S.W., and his next of kin is listed as wife, Mrs R. Leoville, Wagga Wagga N.S.W.

On 9th April 1916 Private Leoville departed Sydney on the HMAT Nestor A71 (along with Coo-ees Harold Uhr and Daniel Lynch).

After arriving in Egypt he was transferred to the 45th Battalion on the 20th May 1916.

On the 7th June 1916 Private Leoville left Alexandria aboard the transport Huntspill bound for France, arriving at Marseilles on the 14th June 1916. He was sent to the 4th Division Base Depot at Etaples, France, until the 29th July 1916, when he departed to join the 45th Battalion.

On the 4th August 1916 Private Leoville was taken on strength of the 45th Battalion when it at Tara Hill two miles north east of Albert, France, preparing to move to the front lines.

On the 8th August 1916 the 45th Battalion was in the front lines in the vicinity of Poziers, France when Private Leoville was wounded by a high explosive artillery shell. He was evacuated to the 13th Australian Field Ambulance which was set up in the village of Warloy- Baillon. Private Leoville had suffered wounds to his head, face, right leg and abdomen, and he died of these wounds that same day. 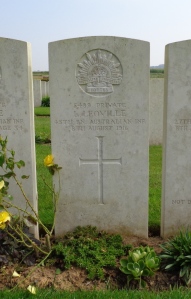