On Thursday 4th September 2014 Stephen and I drove to Warloy-Baillon Communal Cemetery Extension, which is located on the east side of the village of Warloy-Baillon, which is about 21 km northeast of Amiens, and 8 km west of Albert.

According to the Commonwealth War Graves Commission website http://www.cwgc.org/, burials were made in the extension on the eastern side of the Warloy-Baillon Communal Cemetery from July to November 1916 following fighting on the northern sector of the Somme, then some further burials were made after the German offensive in the spring of 1918.

There are 1,331 First World War Commonwealth soldiers buried in this extension.

Lewis Leoville, who joined the Coo-ees at Lithgow, is the only Coo-ee buried in this cemetery. On the 8th August 1916 Private Leoville was wounded in action during the Battle of Poziers, and died the same day after being evacuated to the 13th Australian Field Ambulance set up in the village of Warloy-Baillon.

The photograph below shows Warloy-Baillon Communal Cemetery Extension. Lewis Leoville’s grave is the first one visible on the left. 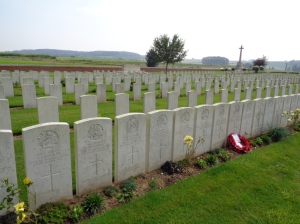 A photograph of the headstone on Lewis Leoville’s grave will be placed on his individual blog entry, and form part of a Roll of Honour for the fallen Coo-ees on this blog.

This entry was posted in Cemeteries and Memorials and tagged Louis Leoville, Warloy-Baillon Communal Cemetery Extension. Bookmark the permalink.