On Monday 1st September 2014 Stephen and I drove to V.C. Corner Australian Cemetery and Memorial, which is located 2 km north-west of Fromelles, in France.

According to the Commonwealth War Graves Commission website http://www.cwgc.org/, V.C. Corner Cemetery is the only uniquely Australian cemetery on the Western Front. The cemetery was created After the Armistice, and contains the graves of 410 Australian soldiers who were killed in July 1916 during the Battle of Fromelles, and whose bodies were found on the battlefield, but could not be identified. The large area containing the graves is covered with a garden bed containing red rose bushes in this cemetery.

Instead of marking the unidentified graves individually, it was decided to record on a memorial in the cemetery the names of all the Australian soldiers who were killed in the Battle of Fromelles whose graves are not known. There are 1181 soldiers either buried in unknown graves and/or commemorated in this cemetery.

Two of the names on the memorial were Coo-ees. One was Joseph Patrick Wallis (Wailes) who joined the Coo-ees at Dubbo. He was one of over a 100 of those named on the memorial whose remains were later identified and re-interred at Fromelles (Pheasant Wood) Military Cemetery in 2010.

The other Coo-ee named on the memorial was Charles William Gordon Conroy, who according to his service record was a chemist when he enlisted, and joined the Coo-ees at Orange. He was killed in action at the Battle of Fromelles on 19/20 July 1916.

The photograph below shows Charles Conroy’s name (name 10 from the bottom in the left row in the first panel on the left) on the 54th Infantry Battalion’s list of names on the memorial wall at V. C. Corner Australian Cemetery and Memorial. (Joseph Patrick Wallis’ name is on the middle panel). 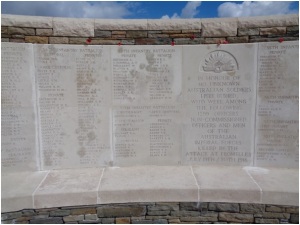 A photograph of the Charles Conroy’s name on the memorial will be placed on his individual blog entry, and form part of a Roll of Honour for the fallen Coo-ees on this blog.

This entry was posted in Cemeteries and Memorials and tagged Charles William Gordon Conroy, Joseph Patrick Wallis. Bookmark the permalink.