On Thursday evening 28th August 2014 Stephen and I visited the Menin Gate Memorial, which is located on the eastern side of Ypres (now Ieper) in the Province of West Flanders in Belgium, on the road to Menin (Menen) and Courtrai (Kirtrijk).

According to the Commonwealth War Graves Commission website http://www.cwgc.org/ the Menin Gate is one of four memorials to the many missing WWI soldiers in the area knows as the Ypres Salient in Belgian Flanders.

The Menin Gate was chosen as one of these four sites because of the hundreds of thousands of soldiers who passed through the gate on their way to the battlefields. The Menin Gate commemorates those who died from the Australian, Canadian, Indian, South African and United Kingdom forces who died in the Salient with no known grave, and bears more than 54,000 names.

Every night at 8 pm traffic under the Menin Gate is stopped, and members of the local Fire Brigade sound the Last Post as part of a memorial service held on the roadway underneath the arches of the Memorial. We attended the 8 pm memorial service, but as there was a large crowd we arrived too late to get a good spot to view the service, so the photo I have included below of the service was taken during our 2012 visit to the Menin Gate. 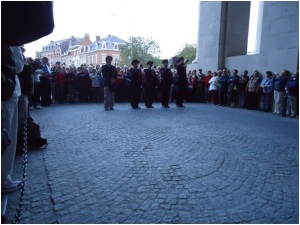 Last Post being played at the 8 pm service at the Menin Gate Memorial (Photograph: H. Thompson 11/8/2012)

Names of fallen soldiers are recorded on all the internal walls listed alphabetically in rank order within their Battalion, including the staircase area on the side. Many wreaths were laid along the walls on the stairs, and in the area under the main arches of the memorial. 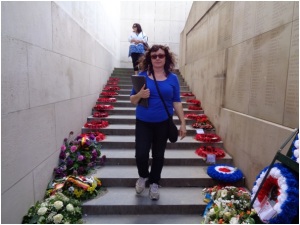 Wreaths on the stairs at the Menin Gate Memorial (Photograph: S. Thompson 29/8/2014)

There are five fallen Coo-ees named on the Menin Gate Memorial:

We returned the next day on Friday 29th August to take some more photographs of the names on the memorial (as some areas such as the stairs were not well lit the night before). 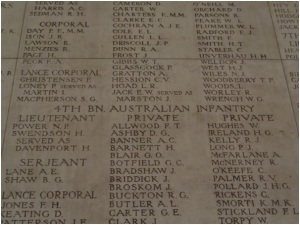