After our arrival in London on Sunday 17th August 2014 we picked up our hire car, and drove the short distance to Harefield (St. Mary) Churchyard, at Harefield, Middlesex, England, where Bill Hitchen from Gilgandra is buried.

An Australian flag marks Bill Hitchen’s grave 2nd from the left in the second row in the photograph below. 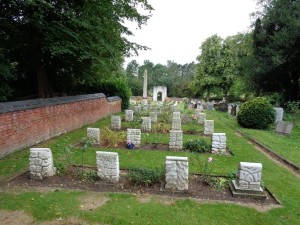 The photograph below of the Commonwealth War Graves section at Harefield (St. Mary) Churchyard from the Australian War Memorial website http://www.awm.gov.au/collection/P02293.001 showing the same scene was taken about 1917 (based on the latest date of death that can be seen on  the headstones). 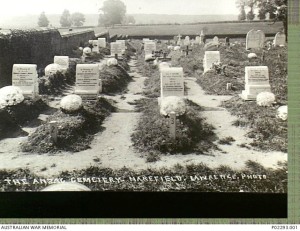 Bill Hitchen’s grave at the time this photograph was taken did not have a headstone, only a wooden cross. Note the position of the headstones on these graves. The headstones have been reversed at a later date, and part of the wall removed, following the expansion of the cemetery.

According to the Commonwealth War Graves Commission website http://www.cwgc.org/ Harefield (St. Mary) Churchyard contains 120 graves from the First World War and 6 graves from the Second World War. The First World War graves are mostly of Australian soldiers who died at Harefield Park in No. 1 Australian Auxiliary Hospital. Bill Hitchen is the only Coo-ee buried in this churchyard.

A photograph of the headstone on Bill Hitchen’s grave will be added to his individual blog entry, and form part of a Roll of Honour for the fallen Coo-ees on this blog, after our return to Australia.

This entry was posted in Cemeteries and Memorials and tagged William (Bill) Thomas Hitchen. Bookmark the permalink.