The “Gilgandra barber” and the Coo-ees welcomed in Lithgow

The Gilgandra braves — the “Coo-ees” — were accorded an enthusiastic reception on Monday last. They left Wallerawang at 9.30 a.m., and marched to Middle River, where they halted. They were met there by the men of the Lithgow camp and a right royal time was spent. It is an offence to have long hair, and as the laws of the Medes and Persians altereth not, neither do the laws according to the Gilgandra recruits alter. At least six of the Lithgow boys needed tonsorial attention and the “Gilgandra barber,” who sat as judge, declared them guilty and sentenced them to be shorn of their curly locks. Despite protests, the chief executioner carried out his duties to the satisfaction of all but the six. These latter have now cool heads — it will prevent them from becoming hot-headed.

“’Fall in” was then sounded, and the two squads of soldiers marched to Bowenfels, where they halted to await the welcome ceremonies. 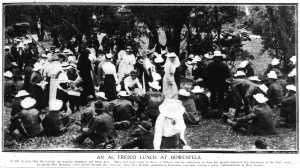 The visitors looked in the pink of condition and were as hard as nails. They had increased their number by five at Wallerawang.

The welcome arrangements were admirably carried out by the chief marshals (Messrs. A. E. Roper and Saunderson). There was not a hitch anywhere. This is as it should be and the gentlemen concerned are to be congratulated.

The Town Band played at the meeting place, and played beautifully.

The Mayor (Ald. Pillans) then welcomed the “Coo-ees” to Lithgow in a speech admirably suited to the occasion — being short, concise, and good. Major Wynne responded on behalf of the visitors.

The procession was then formed, the mounted police in front, then the aldermen, the Progress Association and prominent townspeople, then came the Lithgow recruits, followed the Town Band, and then came the “Coo-ees,”‘ each town being represented by their respective units — a flag with the name or the town being the line of demarkation. Then we had our own cadets, with trumpeters playing smartly and briskly. Patrols of Boy Scouts, under Scout-master Lamb, were also in evidence and added considerably to the success of the procession. The civilians also joined in as well as scores of motor cars, buggies, ‘busses, etc. The procession wended its way along Main-street, across Eskbank bridge, up Railway Parade, and into the Trades Hall, which had been kindly loaned for the occasion.

At six o’clock the braves were entertained at luncheon at the Town Hall. This over, it had been intended to have a smoke social, but as the Oddfellows Hall proprietary had kindly granted a free pass for their picture show to the men, they all preferred that, and a splendid programme was screened to the enjoyment of the vast audience present.

On Tuesday advantage was taken of having squad drill, after which general leave was granted. The men were also given white hats and dungarees and they looked more like soldiers than they did in civilian costume.

The squad has two mascots — a young cattle dog and a fox. The young recruit who had charge of them said, “Now I’ve got them over the worst of their trouble, all the others want to collar them, but they won’t get them. They’re mine.”’ 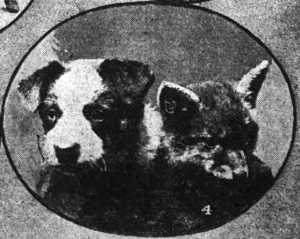 Note: According to a docket in the official correspondence of the march, Thomas Dowd, a recruit from Wongarbon, was paid for 21 days barbering services on the march, so he appears to have been the “Gilgandra barber” in the above article.

This entry was posted in Other articles, Research notes, Towns and tagged Lithgow, Thomas Walter Dowd. Bookmark the permalink.