The blue dungaree suits and white hats issued to the Coo-ee recruits at Lithgow were not unique to the 1915 Coo-ee March.

Following Australian Imperial Force (AIF) Order No. 2 on 26 August 1914, which ‘prescribed the uniform, kit, and necessaries to be issued to each member of the AIF’, enrolling recruits in the AIF were to be issued with a dungaree jacket, a pair of dungaree trousers, and a white hat. [1] This hat was described as a ‘white linen hat’ in The Sydney Morning Herald.[2]

“Marmalades” – the new raw recruits in the military camps – were issued with the blue dungaree suits and white hats as their initial uniform, which, according to an article in the National Advocate, if not washed before being worn for the first time, gave a ‘blue tint’ to the mens’ skins, ‘a tinge which gradually deepens upon further acquaintance’ with the unwashed suits.[3]

The Minister for Defence had instructed that dungarees were to be issued to the recruits on the Coo-ee March at Lithgow or Wallerawang, ‘so that the men may finish their march in some approach to uniform’.[4] 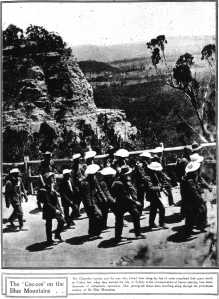 The Sydney Morning Herald reported on their arrival and triumphant procession into the city of Sydney that they ‘wore blue dungarees which didn’t always fit them, and they were somewhat travel-stained and weary after five weeks’ march – somewhat slouchy, in fact; but the city never gave a more enthusiastic welcome to any body of men that it gave to these 263 men from the country.’[6] 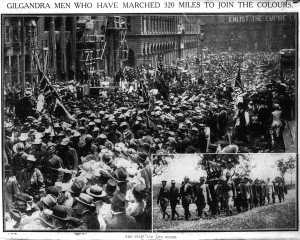