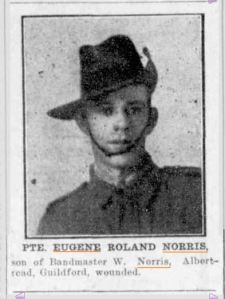 Per his military service record (regimental no. 4566), Eugene Norris was born at Paddington, Sydney.[1] He gave his age as 21 years and 9 months, his marital status as single, and his occupation as horse driver. His description on his Certificate of Medical Examination was height 5 feet 2 inches tall, weight 9 stone, with a fair complexion, blue eyes, and fair hair. His religious denomination was Church of England. He claimed that he had no previous military service.

He was reported in The Cumberland Argus and Fruitgrowers Advocate as being ‘one of the famous Coo-ees who marched through Parramatta’.[2]

His ‘Joined on’ date on his Attestation Paper was 11th November 1915 (the day the Coo-ees marched from Parramatta to Ashfield). He was attested on 11th November 1915, and completed his medical examination at Liverpool on 13th November 1915. (An anomaly in his service record is that his ‘Oath to be taken by person being enlisted’ section in his Attestation Paper is recorded as having being taken at Liverpool, but the Attesting Officer’s signature is the same as for several of the other Coo-ees who were recorded as having being  attested at Ashfield on the same day).

After the Coo-ee March he went to Liverpool Camp as reinforcement for the 13th Battalion.

He was one of 14 ‘local boys’ (along with several other Coo-ees) to be presented with a sheepskin vest and a money belt, and a wristlet watch, at a farewell held in the Elite Hall in Guildford on Thursday 9th December 1915.[3]

On his embarkation roll his address at time of enrolment was Albert Parade, Guildford, N.S.W., and his next of kin is listed as his father, W. [William] Norris, at the same address.[4]

On 16th February 1916 Private Norris was one of the first group of Coo-ees to embark overseas on active service, and departed Sydney on the HMAT Ballarat A70 with the 14th reinforcements for the 13th Battalion.

On 1st April 1916 he was transferred to the 54th Battalion in Egypt.

On 17th June 1916 Private Norris left Alexandria aboard H.T. Kalyan bound for France.  He arrived at Marseilles on 24th June 1916.

Private Norris served with the 57th Battalion on the Western Front in France until 14th October 1916 Private Norris was sent to the 1st Casualty Clearing Station with keloid on his heel. The 57th Battalion had marched to billets at Estaires, France, the day before, and it was noted in the Battalion diary that ‘a few men suffered from slightly blistered feet due chiefly to new boots’.[5] On the 16th of October 1916 he was placed aboard a hospital train and evacuated to the 35th General Hospital at Calais, France.

He was discharged from hospital on 16th November 1916, and sent to the 5th Australian Division Base Depot at Etaples, France.

On 20th August 1917 Private Norris was granted leave to England. He re-joined the 57th Battalion on 3rd September 1917.

On 27th October 1917 the 57th Battalion was being relieved by the 28th Battalion at Broodseinde, Belgium, when the Germans launched a gas barrage.[7] Private Norris was wounded by gas and a shrapnel wound to his thigh. He was moved back to the 3rd Canadian Casualty Clearing Station. On 28th October 1917 he was placed aboard the 32nd Ambulance Train and admitted to the 55th General Hospital at Boulogne, France.

On 14th November 1917 he was transferred to Suffolk Hospital in Bury St Edmonds.

On 11th November 1918 Private Norris was granted leave to England.

On 25th November 1918 whilst still on leave he was admitted to the 1st Australian Auxiliary Hospital at Harefield, England sick. He was discharged on 12th December 1918 and granted leave to report to the No. 1 Command Depot at Sutton Veny on 15th December 1918.

He reported back from leave two days late on 17th December 1918 and was dealt with by the Orderly Room.

Private Norris departed England on 2nd January 1919 for return to Australia aboard the H.M.A.T. Karmala, with the note ‘for influenza’.

He was discharged medically unfit on 4th May 1919.

This entry was posted in Recruits and tagged Eugene Norris, HMAT Ballarat A70, Parramatta recruits. Bookmark the permalink.