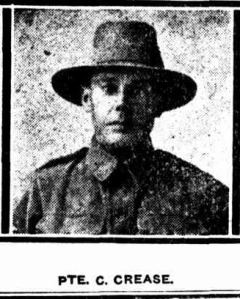 Per his military service record (regimental no. 4754), Charles Crease was born at Camperdown, N.S.W.[1]  He gave his age as 38 years, his marital status as single, and his occupation as labourer.  His description on his Certificate of Medical Examination was height 5 feet 6 inches tall, weight 146 lbs., with a ruddy complexion, brown eyes, and dark brown hair. His religious denomination was Roman Catholic.  He claimed to have no previous military service.

On his embarkation roll his address at time of enrolment was Kiyare, Simmonds Street, Enmore, N.S.W.[2]  His next of kin was listed as his sister, Mrs J. Latham, at the same address.

On 8th March 1916 Private Crease, along with many of the other Coo-ees, departed Sydney on the HMAT A15 Star of England. He arrived in Egypt on 11th April 1916.

On 19th April 1916 Private Crease was transferred to the 45th Battalion at Tel-el-Kebir.

On the 2nd June 1916 Private Crease left Alexandria aboard the transport Kinfauns Castle bound for France.  He disembarked at Marseilles on 9th June 1916.

Private Crease served with the 45th Battalion through its first action at Fleurbaix, France in July 1916 then as it moved to Pozieres in early August 1916.

On 12th August 1916 the 45th Battalion was in reserve trenches between Pozieres and Martinpuich, when Private Crease was wounded in action, receiving a shrapnel wound to his left hand.[3]  He was evacuated to the 44th Casualty Clearing Station.  On 13th August 1916 he was sent to the 24th General Hospital at Etaples, France.

On 6th September 1916 Private Crease was discharged from hospital, and sent to the 4th Australian Division Base Depot.

On 17th October 1916 Private Crease rejoined the 13th Battalion when it was conducting training and supplying fatigue parties at Murrumbidgee Camp at La Clyette, Belgium.[4]

On 9th May 1917 the 13th Battalion was conducting training at Bresle, France, when Private Crease was admitted to the 56th Casualty Clearing Station suffering Neuritis.  He rejoined the Battalion on 15th May 1917.

On 29th September 1917 the 13th Battalion was near Zonnebeke, Belgium, when Private Crease was wounded in action, receiving shrapnel wounds to his arm, legs and chest.[5] He was evacuated to the 3rd Australian Field Ambulance, then on to the 10th Casualty Clearing Station.

On 5th October 1917 Private Crease was moved back to the 1st Canadian General Hospital at Etaples, France.

On 16th October 1917 Private Crease was evacuated to England on the Hospital Ship Newhaven, where he was admitted to the 1st Western General Hospital at Liverpool, England.

On 27th December 1917 Private Crease was admitted to the camp hospital sick [VD Venereal Disease]. He was discharged on 3rd January 1918.

On 14th February 1918 Private Crease was transferred to the No. 2 Command Depot at Weymouth, England.

He arrived in Australian on 22nd May 1918 (gunshot wound right groin and abdomen).

He was discharged termination of period of enlistment on 23rd June 1919.

This entry was posted in Recruits and tagged Charles Crease, HMAT A15 Star of England, Lawson recruits. Bookmark the permalink.