Per his military service record (regimental no. 5385), Joseph Francis Healey was born at Leeds, England.[1]  His surname is spelt as “Healy” in some places in his service record.  He gave his age as 41 years and 3 months [although he appears to have been several years older than this], his marital status as single, and his occupation as cook.  He claimed that he had no previous military service.

There is some irregularity in his service record. No details apart from his age, and recording his religious denomination as Roman Catholic, are given on his Certificate of Medical Examination, and it was not signed by an Examining Medical Officer.  His period of service in his service record is dated as having commenced on 26th October 1915 (when the Coo-ees were at Blayney).  He was attested by Lieutenant Edward J. Shaw on 13th November 1915, with the oath dated from 26th October 1915, and recorded as ‘taken and subscribed at Blayney’ on 26th October 1915.

The Leader named Joseph Healey as one of six men who joined the Coo-ees at Blayney.[2]

After completing the Coo-ee March he went to Liverpool Camp as 15th reinforcement for the 13th Battalion.

On 21st November 1915 Private Healey was charged with being absent without leave, and fined 1 day’s pay.

Private Healey was transferred to 17th Reinforcement for the 13th Battalion on 11th March 1916.

On his embarkation roll his address at time of enrolment was 91 Rope Street, Leichhardt, Sydney, N.S.W., and his next of kin is listed as friend, M. Riches, at the same address.

On 9th April 1916 Private Healey departed Sydney on the HMAT Nestor A71 (along with several other Coo-ees), bound for Egypt. 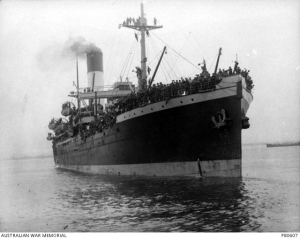 Photograph of HMAT A71 Nestor loaded with troops on an earlier voyage, taken 11 October 1915. Part of the Australian War Memorial Collection. PB0607.

On 7th June 1916 Private Healey departed Alexandria aboard His Majesty’s Transport Ionian bound for France, and arrived at Marseilles on 14th June 1916.  He marched into the 4th Australian Divisional Base Depot at Etaples.

On 11th October 1916 the 13th Battalion was training at Quebec Camp at Rhenninghelst, Belgium. Private Healey was charged with being absent without leave from Camp from 10 pm on 8th October 1916 till 5 pm on 10th of October 1916.  He was awarded 3 days Field Punishment Number Two and fined 6 days pay.

On 4th February 1917 the 13th Battalion launched an attack on the German Trenches in front of the village of Guedecourt, France.  During this attack Private Healey was wounded in action when he received a gun shot wound to his left knee.  He was evacuated to the 12th Australian Field Ambulance on 5th February 1917.

On 9th February 1917 Private Healey was admitted to the 8th General Hospital at Rouen, France.  He was sent to Le Harve later that day, and boarded the Hospital Ship Formosa, bound for England.

He was admitted to the 2nd Birmingham War Hospital on 10th February 1917.

On 26th March 1917 Private Healey was evacuated to the 3rd Australian Auxiliary Hospital at Dartford, England.

On 9th April 1917 Private Healey was discharged from hospital, and transferred to the Number 2 Command Depot at Weymouth, England.

A Medical Report on an Invalid form in his service record dated 14th May 1917 stated that he was ‘over age – 47 years’.

Private Healey arrived in Australia on 18th of September 1917.

He was discharged medically unfit at Sydney on 29th December 1917, with disability gun shot wound to the left leg, and over age.

This entry was posted in Recruits and tagged Blayney recruits, HMAT A71 Nestor, Joseph Francis Healey. Bookmark the permalink.