Gilgandra Begins It : The Marching Song of the Coo-ees

GILGANDRA BEGINS IT  – THE POEM AND THE SONG

There were several poems and songs written about the Coo-ees during the 1915 Coo-ee March.

First published was a poem written by Del. W. McCay called ‘Gilgandra Begins It’, which was published  two days after the Coo-ee March commenced, in his column ‘The Moving Picture-Show’ in The Sun, on 12th October 1915.[1] 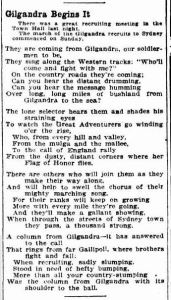 The lone selector hears them and shades his
straining eyes
To watch the Great Adventurers go winding
o’er the rise,
Who, from every hill and valley,
From the mulga and the mallee,
To the call of England rally
From the dusty, distant corners where her
Flag of Honor flies.

There are others who will join them as they
make their way along,
And will help to swell the chorus of their
mighty marching song,
For their ranks will keep on growing
More with every mile they’re going,
And they’ll make a gallant showing,
When through the streets of Sydney town
they pass, a thousand strong.

A column from Gilgandra— it has answered
to the call
That rings from far Gallipoli, where brothers fight and fall
When recruiting, sadly slumping.
Stood in need of hefty bumping.
More than all your country-stumping
Was the column from Gilgandra with its
shoulder to the ball.”

The words were re-published in The Blue Mountain Echo on 5th November 1915, with a note that ‘The above verses have been set to music by Rev. A. E. Ferguson, of the local Presbyterian Church, and will be a popular melody during the visit of the Gilgandra “Coo-ees” here, and afterwards at the Front.’[2]

The Blue Mountain Echo reported on 12th November 1915  that this song was sung by the choristers at the concert held for the Coo-ees at Katoomba on Friday night 5th November 1915, and ‘So stirring was it, in fact, that the “Coo-ees” have adopted it as their marching song’.[3]

The Blue Mountain Echo also printed this poem as a broadsheet with the heading Gilgandra Begins It. Words written by Del. W. McCay for the Sydney “Sun”.  A copy of this broadsheet is in the National Library of Australia collection.[4]  A digitised copy can be seen at http://nla.gov.au/nla.obj-151234776

The National Library of Australia also holds a copy of the printed music score by E. A. Ferguson, titled Gilgandra Begins It : The Marching Song of the Coo-ees.[5]  A digitised copy of this music score can be viewed at http://nla.gov.au/nla.obj-166916648.  It has an attractive cover, with a photograph of the Coo-ees on it.