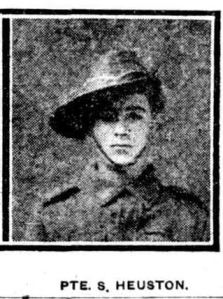 Per his military service record (regimental no. 4796), Sidney James De Courcy Heuston was born at Coonamble, N.S.W.  He gave his age as 18 years and 1 month, his marital status as single, and his occupation as plumber.  His description on his medical was height 5 feet 7 ¾ inches tall, weight 8 stone 3 lbs., with a dark complexion, grey eyes, and dark brown hair.  His religious denomination was Methodist.  He claimed that he had four years previous military service with the Senior Cadets.

Written on the top of his Attestation Paper is that he ‘Presented at Orange 24/10/15’.  He completed his medical examination on the 24th October 1915 at Orange, and was attested by Captain Nicholas at Orange on 24th October 1915.  “S. J. Deloury Hewston”was named as one of the men who were recruited to join the Coo-ees at Orange in the Leader. [1]

His initial Application to Enlist in the Australian Imperial Force form dated 24th October 1915 was addressed to the Recruiting Officer at Orange, and his postal address was Parkes Street, Wellington.  His parents George Heuston and Louise Heuston both signed this form, giving consent for their son to join, as he was under 21 years of age.  However, it was noted that he had joined the Coo-ee March at Wellington in an article in the Sunday Times a year after he had joined.[2]  His place of enlistment is listed as ‘Wellington’ on the Medical Report on an Invalid form dated 25th September 1916 in his service record.  So it appears he may first have presented to join the Coo-ees when they recruited at Wellington on 16th and 17th October 1915, then caught up with them and joined them at Orange where the Coo-ees stayed overnight on 24th October 1915, after his parents had signed his consent form.

On 7th February 1916 Private Heuston was charged at Liverpool Camp with being absent from special picquet on 5th February 1916.  He was fined 5 shillings.

On his embarkation roll his address at time of enrolment was Park[es] Street, Wellington, N.S.W., and his next of kin is listed as his father, G. W. DeC. Heuston, at the same address.

On 8th March 1916 Private Heuston, along with many of the other Coo-ees, departed Sydney on the HMAT A15 Star of England, and arrived in Egypt on 11th April 1916.

On 19th April 1916, he was transferred to the 45th Battalion in Egypt, along with some of the other Coo-ees.

On 2nd June 1916 Private Hueston left Alexandria with several other Coo-ees in  45th Battalion aboard the transport Kinfauns Castle, bound for France, arriving at Marseilles on 8th June 1916.

Private Heuston served with the 45th Battalion through its first action at Fleurbaix, France, in July 1916 then as it moved to Pozieres in early August 1916.

On the night of the 5th/6th of August 1916 the 45th Battalion was in the front line trenches between Pozieres and Martinpuich, France.  Private Heuston was wounded in action on 6th August 1916, suffering a gunshot wound to his right leg, and was evacuated to the 3rd Casualty Clearing Station.

He was then admitted to the 13th General Hospital at Boulogne, France, on 7th August 1916.

On 11th August 1916 Private Hueston was sent by the Hospital Ship Jan Breydel to England, and admitted to the 1st Birmingham War Hospital, with a gunshot wound to the right thigh.

On 6th September 1916 Private Heuston was transferred to the 1st Australian Auxiliary Hospital at Harefield, England (3 days after Captain Bill Hitchen had died in the same hospital).

On 28th September 1916 he was discharged from hospital and sent to Weymouth, England.

He arrived in Sydney on 31st December 1916, and was discharged medically unfit on 28th February 1917.

This entry was posted in Recruits and tagged HMAT A15 Star of England, Orange recruits, Sidney Heuston, Wellington recruits. Bookmark the permalink.