Per his military service record (regimental no. 4442), Henry James Naughton Blakeman was born at York, Western Australia. He gave his age as 21 years and 5 months, his marital status as single, and his occupation as plumber. (However his Certificate of Discharge in his service record states he was only 17 years of age when he enlisted, and his birth was registered in Western Australia in 1898).[1] His description on his medical was height 5 feet 8 inches tall, weight 122 lbs., with a fair complexion, blue eyes, and brown hair. His religious denomination was Roman Catholic. He claimed that he had had 6 months previous military service with the Cadets and served 3 years with the 41st Infantry.

On his embarkation roll his address at time of enrolment was Bowenfels, Cascade Street, Katoomba, N.S.W., and his next of kin is listed as his father, H. N. [Henry Naughton] Blakeman, at the same address.

On 16th February 1916 Private Blakeman was one of the first group of Coo-ees to embark overseas on active service, and departed Sydney on the HMAT Ballarat A70 as 14th reinforcement for the 13th Battalion. 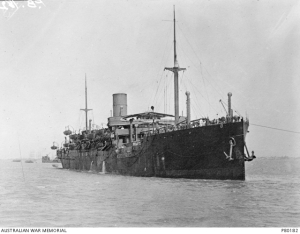 On 1st April 1916 Private Dawson, (along with the other Coo-ees he had travelled to Egypt with), was transferred to the 54th Battalion at Ferry Post.

On 23rd May 1916 Private Blakeman was sent to a Field Ambulance suffering from Abcess. On 25th May 1916 he was transferred to No. 2 Casualty Clearing Station at Ferry Post in Egypt. On 28th May 1916 he was discharged and rejoined his unit.

On 19th June 1916 Private Blakeman left Alexandria aboard H.T. Caledonian bound for France, and arrived at Marseilles on 29th June 1916.

On the night of the 19/20th July 1916 Private Blakeman was with the 54th Battalion when it participated in the Battle of Fromelles in France. During the battle he was wounded in action, suffering a shrapnel wound to his left thigh, and was sent to a Field Ambulance.

On 13th October 1916 Private Blakeman was discharged from hospital and granted leave to report to the Number 1 Command Depot at Pernham Downs, England on 28th October 1916.

On 1st November 1916 he was transferred to the 14th Training Battalion at Wareham, England.

On 12th November 1916 Private Blakeman departed Folkestone, England aboard the Transport Princess Clementine bound for France. He marched out to rejoin the 54th Battalion on 15th November 1916 when it was training at Rainneville in France.[2]

On 3rd March 1917 he was transferred to the 2nd Convalescent Depot.

He was discharged on 13th March 1917, and marched into the 5th Division Base Depot at Etaples, France.

On 17th March 1917 Private Blakeman departed the 5th Division Base Depot and re-joined the 54th Battalion on 18th March 1917, which was in the vicinity of Beaulencourt in France.[3]

On 19th April 1917 Private Blakeman was sent to the 8th Australian Field Ambulance suffering from Enteritis. On 20th April 1917 he was moved back to a Casualty Clearing Station, then to the 5th Division Rest Station.

He was discharged on 11th May 1917 and rejoined the 54th Battalion on 12th May 1917, when it was at Noreuil in France, preparing to move into the front line at the Hindenburg Line in the vicinity of Reincourt, France.[4]

On 9th July 1917 Private Blakeman was detached to the 14th Machine Gun Company.

On 28th August 1917 he was transferred from the 54th Battalion to the 14th Machine Gun Company, which later became part of the 5th Machine Gun Battalion.

On 3rd February 1918 Private Blakeman went on leave to England. He returned to the 5th Machine Gun Battalion on 20th February 1918.

After the Armistice, on 19th November 1918 Private Blakeman went on leave to England.

He returned to the 5th Machine Gun Battalion on 3rd December 1918.

On 22nd January 1919 Private Blakeman was detached for duty at the Corps workshops. He returned to the 5th Machine Gun Battalion on 2nd March 1919.

On 22nd March 1919 Private Blakeman marched into the Australian Base Depot at Le Harve in France.

On 1st April 1919 he departed Le Harve in France, and arrived at Weymouth in England on 2nd April 1919, and marched in to Number 2 Command Depot.

Private Blakeman departed Devonport in England on 15th May 1919 for return to Australia, aboard the H.T. Orontes. He disembarked at Sydney on 1st July 1919.

He was discharged from the AIF Termination of Period of Enlistment on 23rd August 1919.

This entry was posted in Recruits and tagged Henry James Naughton Blakeman, HMAT Ballarat A70, Lithgow recruits. Bookmark the permalink.