Per his military service record (regimental no. 4910), Rowland John Wilson was born at Tallawang, N.S.W.[1]  He gave his age as 24 years and 1 month, his marital status as single, and his occupation as labourer. His description on his medical was height 5 feet 6 inches tall, weight 10 stone 6 lbs., with a fair complexion, grey eyes, and brown hair. His religious denomination was Roman Catholic. He claimed that he had 3 months experience with the Lawson Rifle Club. The “Joined on” date on his Attestation Paper was 7th November 1915.  He was attested at Lawson on 7th November 1915.

After completing the march he went to Liverpool Camp as reinforcement for the 13th Battalion. He completed his medical examination at Liverpool on 15th November 1915.

On the 2nd June 1916 Private Wilson left Alexandria aboard the transport Kinfauns Castle bound for France, arriving at Marseilles on the 8th June 1916.

Private Wilson was killed on the night of the 7th/8th August 1916 when the 45th Battalion was under heavy enemy artillery fire between Pozieres and Martinpuich in the Battle of Pozieres – the same night that fellow Coo-ee William Emerton Hunter was killed, who was also in the 45th Battalion.

Private Wilson’s date of death is recorded as 8th August 1916. He has no known grave.

Private Wilson is remembered on the Australian National Memorial at Villers-Bretonneux in France. 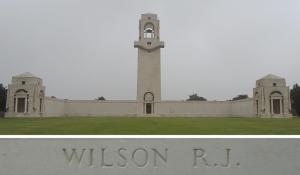 His name is also remembered on the Lawson War Memorial.