Per his military service record (regimental no. 6251), Francis Charles Finlayson was born at Redfern, N.S.W. He gave his age as 28 years, his marital status as married, and his occupation as book keeper. His description on his medical was height 5 feet 11 inches tall, weight 140 lbs., with a fair complexion, grey eyes, and fair hair. His religious denomination was Roman Catholic. He claimed that he had no previous military service. He completed his medical on the 11th November 1915 at Parramatta, and was attested at Parramatta on 11th November 1915.

On his embarkation roll his address at time of enrolment was George Street, Parramatta, N.S.W., and his next of kin is listed as his wife, Mrs. M.[May] Finlayson, 5 Trafalgar Street, Armidale [sic] (Annandale), N.S.W.

He arrived at Plymouth, England, on 26th October 1916. On 4rd November 1916 Acting Corporal Finlayson marched into the 4th Training Battalion at Codford, England.

On 21st January 1917 Private Finlayson was taken on strength of the 13th Battalion whilst it was at Mametz, France conducting fatigue duties.

On 4th February 1917 the 13th Battalion was taking part in an attack on the German trenches in the vicinity of Guedecourt, France. During this action Private Finlayson was killed in action.

According to a letter written home from Private Charlie C. Carr, another soldier from Parramatta, dated 12th February 1917, Frank Finlayson was killed at his side. He wrote: ‘He was in the same platoon, and had only just joined us up. It was his first time in the trenches. He had a great nerve and proved himself a splendid fighter. We had just attacked and taken the German position, when they opened up terribly heavy artillery fire. Frank bravely went out to carry in a wounded German, and got in quite safely, but it was only about five or ten minutes after that he was killed by a German high explosive shell’.[1]

This night was also fellow Coo-ee Stanley E. Stephens ‘first hop-over’ and ‘baptism of fire’ raid against the German trenches, in the same company. He wrote in a letter published in The Farmer and Settler on 17th August 1917 that on the night of 4th February Finlayson was on his left just before the hop-over, and their objective was a trench ‘known as Stormy trench, in which Fritz had a strong post’. He reported that ‘a mess-tin full of rum’ was passed along, and ‘everyone took a swig, and passed it on’, and that he ’gulped down a couple of mouthfuls and handed it to Fin’. After taking the trench and some German prisoners, they returned to their own trench. Stephens reported that ‘Finlayson was separated from us in the hop-over, and entered the trench some distance on our right’, and the Germans began a bombardment ‘putting them into us’. He continued that about midnight ‘Fin. Came along the trench looking for us’, and that ‘after yarning for a minute or two he went back to fetch his web gear and rifle, etc., up to our ‘possy’. Stephens wrote that ‘he and I had been mates for a long while, back in Kiama’, and he ‘had only been gone about ten minutes when another mate named Moss Paine came to tell me that Fin. was killed’, and that he ‘went back along the trench with Moss, but Fin. had been hit in the chest with a piece of shell that exploded in the trench, and had dropped without a word’.[2]

Private Finlayson has no known grave. He left a widow and three young children.

His name is remembered on the Villers-Bretonneux Memorial, France. 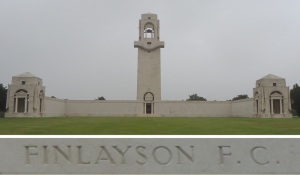