On 7th September 2014 Stephen and I drove to St. Sever Cemetery Extension at Rouen in France.

The majority of the soldiers that died at the Commonwealth camps and hospitals stationed at Rouen during the First World War were buried in the city cemetery of St. Server. A military extension was begun in September 1916, and the last burial took place in April 1920.

There are 8,348 Commonwealth burials from the First World War in this very large cemetery.

Harold Brooks Davis, a young plumber from Leura on enlistment per his service record, who joined the Coo-ees in the Blue Mountains, is the only Coo-ee buried in this cemetery. He died of wounds on 28th February 1917. 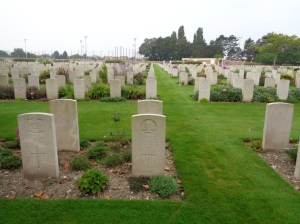 A photograph of the headstone on Private Davis’s grave will be placed on his individual blog entry, and form part of a Roll of Honour for the fallen Coo-ees on this blog.

This entry was posted in Cemeteries and Memorials and tagged Harold Brooks Davis, St. Sever Cemetery Extension. Bookmark the permalink.