Per his military service record (regimental no. 4807), William Emerton Hunter was born at Sydney, N.S.W. He gave his age as 21 years and 1 month, his marital status as single, and his occupation as wheat lumper. His description on his medical was height 5 feet 11 inches tall, weight 172 lbs., with a fair complexion, blue eyes, and brown hair. His religious denomination was Church of England. He claimed that he had no previous military service. He joined the Coo-ees at Geurie. He completed his medical on the 16th October 1915 at Wellington, and was attested at Dripstone by Captain Nicholas on the 19th October 1915.

When the Coo-ees were in Orange, he was to receive some sad news from his mother. The incident was reported in an article titled ‘Tragedy of the War’ in The Leader, as follows: ‘When the Coo-ees arrived at Wade Park on Saturday there was a big parcel of mail waiting for the members of the patriotic band. One fine hefty young fellow named Hunter held out his hand for his letter, and with a smile on his face, walked to the end of the pavilion to read it. He knew by the handwriting on the envelope that it was from his mother in Sydney, who was waiting eagerly for her boy to arrive, at the end of the glorious march from back o’ beyond. He had hardly scanned the first few lines when tears bedimmed his eyes, and then he burst out into a paroxysm of grief. The letter read, “My darling boy.-It is sad news I have to tell. Your two brothers who left Sydney with the 18th Battalion were killed in action on the 27th of August. Be brave, my boy, and try to bear it as your mother and sisters are trying to do. I will send you 10/ on Monday if I have the money.” There was much more of a private nature, and those who were handed the letter to read were visibly affected. The young fellow was broken-hearted, but even the sad blow has not deterred him from carrying out his intentions of going to the front, and now he is doubly eager to be off and avenge .his brothers’ death. The Mayor has given £5 of the money collected for the Coo-ees’ entertainment to the poor lad’s mother. His brothers entered the firing line on the 14th, and were in action till they received their death wounds.’[1]

According to newspaper reports, money raised from a collection made for Mrs Hunter was sent home with Private Hunter, who was allowed to go home for a few days to spend some time with his mother.[2]

This photograph of Private Hunter’s two brothers Frederick and Maurice Hunter was published in The Sydney Morning Herald on 1st November 1915 with the caption “Brothers Hunter of Redfern both killed in action at Gallipoli … a third brother is one of the Gilgandra recruits now marching to Sydney”.[3]

Private Hunter was to hear from his mother again on the march. The Cumberland Argus and Fruitgrowers Advocate reported that at the recruiting meeting held for the Coo-ees in the Park at Parramatta on 10th November 1915: ‘A lady here stepped on to the platform and said her name was Mrs. Annie [sic] Hunter, and that she lived at Young Street, Redfern. Two of her sons had been killed at Gallipoli on August 27, and her third son was now with Captain Hitchen’s men. “I only had three boys,” she said, “and two have been killed; the third one is with the ‘Coo-ees,’ and I wish that I had another one to give in the cause of the Empire.”[4]

After completing the Coo-ee March Private Hunter went to Liverpool Camp as reinforcement for the 13th Battalion.

On the 2nd June 1916 Private Hunter left Alexandria aboard the transport Kinfauns Castle bound for France, arriving at Marseilles on the 8th June 1916.

Private Hunter is remembered on the Australian National Memorial at Villers-Bretonneux in France. 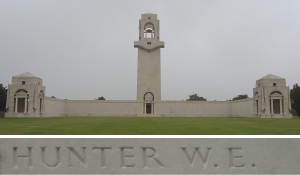 His name is also listed on the Redfern War Memorial (along with the names of his two brothers).

Note: Having already lost 2 sons to the war, after her son William was posted wounded and missing in 1916,  Mrs F. Hunter moved to a war widows’ home later that year in The Boulevarde, Sans Souci, which had been built for her by the Kogarah branch of the Voluntary Workers’ Association, and named “Coo-ee” in memory of the third son who had ‘marched with Hitchen’s Coo-ees’.[5]