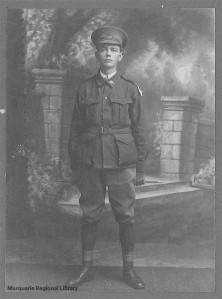 Per his military service record (regimental no. 4901), William Hilton Saunders was born at Goodooga, N.S.W. He gave his age as 21 years and 2 months, his marital status as single, and his occupation as Grocer. His description on his medical was height 5 feet 7 ½ inches tall, weight 9 stone 10 lbs., with a fair complexion, greenish grey eyes, and fair hair. His religious denomination was Anglican. He completed his medical on the 8th October 1915 at Gilgandra before the march began. He was attested at Stuart Town on the 19th October 1915. He claimed that he had no previous military service.

He was one of the thirteen men who stepped forward and gave his name, ‘either to march under Captain Nicholas, or to come after harvest’, when the Coo-ees recruited in Wongarbon on 14th October 1915.[1]

After completing the remainder of the march he went to Liverpool Camp as reinforcement for the 13th Battalion.

On the 6th June 1916 Driver Saunders left Alexandria aboard HMT Oriana, bound for France, arriving at Marseille on the 13th June 1916.

On the 17th August 1917 Driver Saunders was charged with, when on active service, being drunk in Calais about 9.15 pm. He was awarded 21 days Field Punishment Number Two.

Per his 1918 war diary, this period of absence was while he was celebrating the Armistice in London. His entry for the 16th November 1918 was: “Had a great day … Here I am pinched by the MPs & in Warwick Square quite forgot that my pass is overdue & I should have gone back. Oh yes days ago. Who cares”.[2]

On the 12th May 1919 Driver Saunders departed England for return to Australia aboard the HT Port Napier. He arrived in Sydney on the 5th July 1919, and was discharged on the 19th August 1919.

This entry was posted in Recruits and tagged William Hilton Saunders, Wongarbon recruits. Bookmark the permalink.