Transcription of extract from an article titled ‘The Route March : Section Leaders Appointed’ from The Farmer and Settler, 15 October, 1915, p. 3, [part 3 of 5 parts]:
…[Continued] 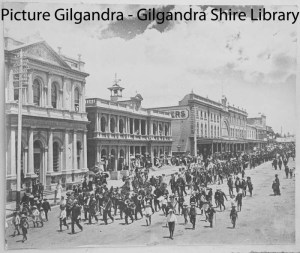 Orange.
The two miles between the night camp and the cook’s advanced party were covered before breakfast on Saturday morning, and then a move was made toward Orange.

It was recognised that the thundery appearance of the sky made it imperative that no time should be lost, but before a start could be made the rain began to come down. The programme arranged by the Orange people was that the column should enter the town at three o’clock, but the rain rendered it imperative to get the men under cover at the earliest possible moment, as a number were without overcoats, and were to receive them at Orange. The town was entered, therefore, about noon, and the Mayor, Alderman E. T. McNeilly, led the way by back streets to Wade Park, where clothes were dried and dry socks issued. One hundred and thirty pairs of socks had just been received from Misses Grant and Moyan, Kirrlbilli, Sydney, for the use of the “Coo-ees,” and they could not have arrived at a more opportune time. Tho Mayoress, Mrs, McNeilly, was found hard at work with a staff of ladies preparing a substantial meal, which was much appreciated by the men, as was also the 2-oz. of “medicine” per man prescribed by the Mayor; the “Follow the King” ideal is being lived up to all through the march, but the circumstances were held to warrant something “medicinal” after the wetting.

After dinner and a spell the “fall in” was sounded and the “Coo-ees”‘ were taken back to the town boundary where a procession was marshalled, and the formal entry made. Rain continued to fall at intervals; notwithstanding this, however, there was a great crowd along the route to the town hall. The Orange town band, the Light Horse, Citizen Forces, and Scouts were in the procession, and the guard of honor was a detachment of soldiers under Sergeant Crook, who had come front Liverpool, Holdsworthy, and Warwick Farm training camps, paying their own expenses, all for the purpose of doing honor to Hitchen’s “Coo-ees.” The Citizen Forces kept a clear space in front of the town hall, and the mayor and aldermen, the shire president, representative clergy, and Messrs. Fitzpatrick, M.L.A. (none the worse for his march and his wetting), H. R. M. Pigott, M.H.R., and many others, welcomed Captain Hitchen and his corps. Captain Hitchen was taken up to the balcony and introduced to the crowd, numbering about four thousand persons, and brief speeches were made by leading men. Captain Hitchen returned thanks, and in apologising for lack of words said that his thanks were none the loss heartfelt, so he would call on Q.M.-Sergeant Lee to speak for him and the “Coo-ees.” Lee got that part of the business over quickly, and, seeing so large a crowd assembled, he seized the opportunity of making a recruiting appeal. Nine men stepped forward to fill the blank files, and word was received that more would come later, so the “snow- ball” should be the bigger by fifteen men if they all pass the doctor.

The sun peeped out for a moment as the National Anthem was being played, but as the sky was again becoming overcast, the proceedings broke up with cheers for everybody, not the least hearty of which were for “Captain Bill Hitchen and his “Coo-ees'” as the great welcome banner put it.

A sumptuous banquet had been prepared under the pavilion at Wade Park, to which over a hundred hungry recruits sat down at 6 p.m. The Mayor presided, and later proposed the health of Captain Hitchen and his men, together with the health of the men that had volunteered that afternoon, and the men that were already soldiers, and had come from the training camps to honor the “Coo-ees.” Mr. J. L. C. Fitzpatrick, in supporting the toast, had a dig at the military authorities for their red-tape and cold-water methods in making these Orange recruits pay their own fares and expenses in welcoming the Gilgandra contingent, Q.M.-Sergeant Lee and Mayor Wynn spoke for the men.

A continental had been arranged to be held in Wade Park after tea, but as the weather still refused to behave, it was called off.’
…

This entry was posted in Description of the route, Towns and tagged Orange. Bookmark the permalink.